skip to main | skip to sidebar

Welcome back to Reads Retreat.

Regular readers will know that I married the girl of my dreams on the 24th Jan, and here's a pic for you all taken outside the church.

Thanks to everyone who sent their good wishes. We had a fantastic day.

".... the kiss of the sun for pardon, the song of the bird for myrth, one is nearer to god in a garden, than anywhere else on earth"

God bless you Grandad Read, wish you were here.

xxxx
Posted by Gary and Jen, and Ruby and Peter at 22:13 No comments:

Welcome back to Reads Retreat, our guide to growing your own veg in raised beds.Earlier in the week I took delivery of a new order from Victoriana Nurseries, who are based at Challock in Kent. In the past I have ordered only dribs and drabs from this renowned supplier, And I have been eagerly watching the postman for a few days now!

This latest order included a Red Currant Bush (v.Rondom) Bare Rooted, a Rhubarb Plant (v.Victoria), 10 off Asparagus Plug Plants (v. Jersey Knight), a packet of Climbing Pea Seeds (v. Victorian Colossal Climbing), and a packet of Sweetcorn seeds (v.Swift Early).The package that arrived was somewhat larger than I had been expecting, and I was not sure how well the plants would have survived the postal service. Imagine then my delight when I opened the packaging and found all was well. This order had obviously been packed by someone who cares about what they do for a living. The Rhubarb plant looked fresh and full of vigor, as did the redcurrant bush, the latter having it's bare roots neatly enclosed in a polythene sack. The asparagus plugs were also well wrapped, undamaged, and still in their original "plug" shape, in spite of the fact that the root balls were quite moist. The accompanying packs of seed, like the rest of the produce, came complete with detailed information on propagation and growing, not the sort of thing you come to expect of plants by post. To say that I was impressed would be an understatement.Having ordered this lot a few days earlier, I had been kept away from the veg beds and the lottie, by the continued cold spell, and was keen to be doing some sort of "Gardening". With that in mind, I had been browsing the Feb 09 issue of the "Grow your own veg" magazine, which i got as a gift subscription from wtb. It was in there that I chanced upon an article entitled "Lasagne Beds". After checking the front cover to make sure it was not the April 1st Edition, I eagerly read on.

This bed system is utilised mainly where you want to create a Raised Bed, without digging and weeding the soil to start with. Often the hardest part in creating raised beds is the soil preparation required before you start; which is often hard work, especially on hard compacted ground that has never been worked. All you need to do once you have constructed your borders (I use scaffold planks) is cover the base with a good thick layer of newspaper, use a watering can to fully soak the paper, then cover with a layer of general purpose / home made compost to about 2" depth. This layering is then repeated until your bed is filled to the level you want. When you have finished, you will have a good layer sufficient for seed sowing / plug planting, and the "Lasagne" layers will rot down whilst at the same time preventing the base layer of weeds from growing, by excluding light from them. At the same time, worms will thrive in this new environment of moist soil and get to work breaking all the humus down. Newspaper also contains the trace element Carbon, which is useful in sustaining healthy plant growth.

The Raised Bed at Reads Retreat that I am going to turn into my Asparagus bed will use this method to top dress the existing bed content. Last season I grew my Climbing French Beans in this space, so the soil that is already there contains a large amount of organic kitchen waste, as well as the Nitrogen bearing roots which I left in the ground this winter to rot down. The reason I'm trying this layering method is that I hope it will help keep the weeds down which in turn should mean that I can leave the bed alone for a greater amount of time. At least the weeding wont be such a chore, and the newly planted asparagus plug plants shouldn't get disturbed too much.

Watch this space to see how I get on. Pictures to follow!

Posted by Gary and Jen, and Ruby and Peter at 07:53 No comments: 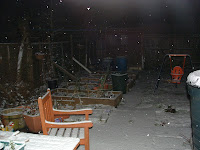 Welcome back to Reads Retreat, our guide to growing veg in Raised Beds.
There won't be much gardening done today,this photo taken 10 mins ago! There's about half an inch cover so far, and it's forecast to continue the rest of the day.

Giant killers back in action, holding Chelsea FC to a draw at Stamford Bridge.

Looking forward to the home replay on 14th Jan.

Come on you Shrimpers !!!

TTFN
Posted by Gary and Jen, and Ruby and Peter at 21:35 No comments:

Gary xxxxx
Posted by Gary and Jen, and Ruby and Peter at 10:09 No comments:

Gary and Jen, and Ruby and Peter
in the Garden of England, Kent, United Kingdom
Welcome to the Reads blog's. Here we will show you how we grow our own veg; in Raised Beds. We now have a Recipe's blog too - check it out! Contributions & comments welcome.

All donations welcome to help keep this site running!